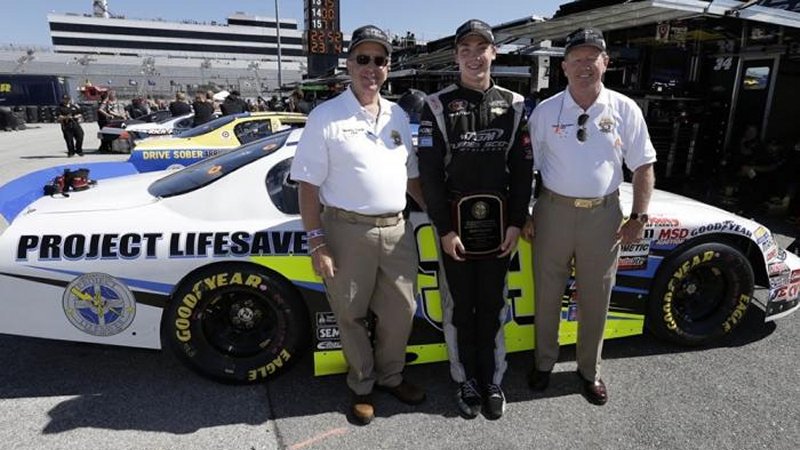 DAYTONA BEACH, Fla. – By any measure, Scott Heckert’s 2014 season in NASCAR’s K&N Pro Series East was a success, highlighted by two race wins, three poles, and an eighth place finish in the season standings while driving the No. 34 Turner Scott Motorsports Chevrolet.

While winning a race in the highly competitive series is a significant career accomplishment, his off-the-track work to raise awareness for victims of cognitive disorders earned him an even more rare distinction.

Heckert was named a Project Lifesaver Ambassador during a pre-race ceremony at Dover International Speedway on Sept. 26, becoming just the fifth person to be so honored.  Previous awardees include Medal of Honor recipient and retired U.S. Army Colonel Jack Jacobs and actor Erik Estrada.

Project Lifesaver is a non-profit organization that provides law enforcement and other first responders with equipment and training to locate and rescue individuals suffering from cognitive disorders like Alzheimer’s disease and Autism who are prone to life threatening behaviors.

According to a Project Lifesaver release, Heckert “has demonstrated a relentless dedication to help raise awareness of Project Lifesaver and the devastating effects of Alzheimer’s disease.”  The group’s CEO, Chief Gene Saunders, and Chief of Staff, Chief Tommy Carter, presented Heckert with a certificate proclaiming the honor.

Heckert’s work on behalf of the organization is personal; his aunt has been diagnosed with Alzheimer’s disease and is enrolled in the Project Lifesaver program.*

“I know how fortunate I am to be doing something I love,” Heckert said.  “Being named an Ambassador is certainly an honor – and it makes me that much more determined to continue spreading the word.”

* Since the publication of this article by NASCAR, Heckert’s aunt that suffered from Alzheimer’s disease has passed on.