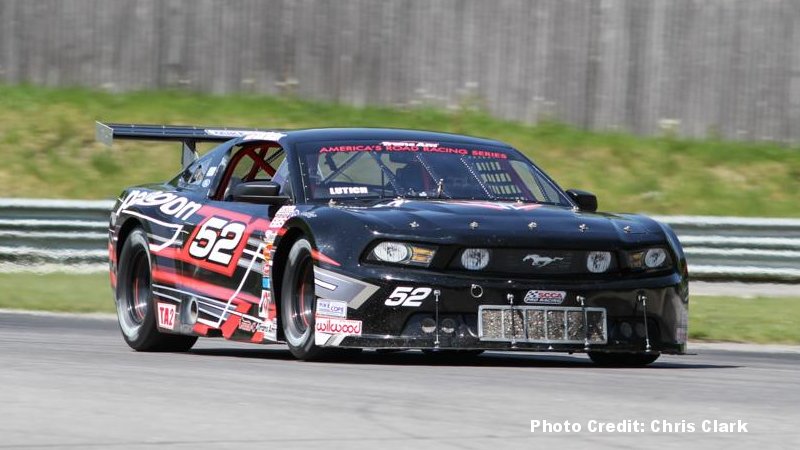 On Saturday, May 23rd, Scott Heckert raced in the Trans Am race at Lime Rock Park (CT), driving the No. 52 Ford Mustang of Mike Cope Racing Enterprises. Heckert started the race in the sixth position, finishing in fourth.

MCRE platform and direction showcased in Round 4

CLEARWATER, Fla.  (May 25, 2015) – The Mike Cope Racing Enterprises (MCRE) platform was dominant in The 3-Dimensional Services Muscle Car Challenge, Round 4 of the 2015 Trans Am Championship at Lime Rock Park, with MCRE built cars sweeping the top five finishers in the 100-mile race.

“It was an absolutely amazing weekend,” said Mike Cope, Owner of MCRE. “Weekends like this not only show the capability of the MCRE platform, but why we’re so invested in Trans Am’s TA2 class.  We were 50 laps into a 100-mile race on a road course and we had a train of 12 of these cars running nose-to-tail in front of a crowd of thousands— it’s road racing at its best.  The race showcased the endurance and consistency of our cars but at the same time the sheer speed, with Kevin (Poitras) setting the fast lap and track record for TA2 with a 54.486.”

But the accolades continued outside the top three for MCRE built cars with Scott Heckert and JJ Haley finishing fourth and fifth, in a MCRE Ford Mustang and MCRE Chevrolet Camaro, respectively.  Both Heckert and Haley are plying their trade in the Trans Am Series as well as at the K&N Pro Series East, as members of HScott Motorsports.

“It couldn’t have gone better if we had planned it,” said Cope.  “We went into the weekend talking about the value of TA2 as top-level road racing experience for young talents like Scott and JJ, and then they go and land in the top five in a field full of some of the best road racers in the country.  The similarities between their K&N rides and TA2 let them hit the ground running, and I can’t give Scott (Heckert) enough credit for his fourth place finish in his first-ever appearance in Trans Am.  Likewise, JJ was sick throughout the weekend and really battled through it for his finish.”

While MCRE cars only made up seven of the twenty-three car entry in TA2, their dominance on the weekend came as little surprise to the Cope team.

“We’re confident in the quality of our product,” said Cope. “Yes, you can say that some of the best drivers in the paddock own MCRE built cars; but then that means that the best drivers pick MCRE—which is a statement in and of its self.  Either way, I’m proud of our performance this weekend and I expect it to set the bar for weekends going forward.”

As of the completion of Round 4 at Lime Rock, MCRE built cars control seven of the top 15 positions in the 2015 Chase for the Trigon Trophy, the TA2 class point standings, and five of the top 10.

The MCRE team will now begin preparations for Round 5 of the 2015 Trans Am Championship at New Jersey Motorsports Park on June 14, 2015.

Perhaps no other team has worked so diligently to achieve success over the course of 30 years as MCRE. Over the years, they have successfully launched corporate sponsorships in national series, developed short track and SCCA Road race champions and mentored young upcoming drivers. Lead by Mike Cope, he brings the same enthusiasm, dedication and knowledge to his race team that made him victorious in his own racing career.

Mike Cope Racing Enterprises is based in Clearwater, Florida.

Since its incorporation, BestLine has developed a new line of full synthetic lubricants and lubricant additives that dramatically reduce friction, heat and mechanical wear to an extent never before seen or tested. BestLine refers to its proprietary technology as “Micro Lubrication Technology, (TM)” or “MLT.”