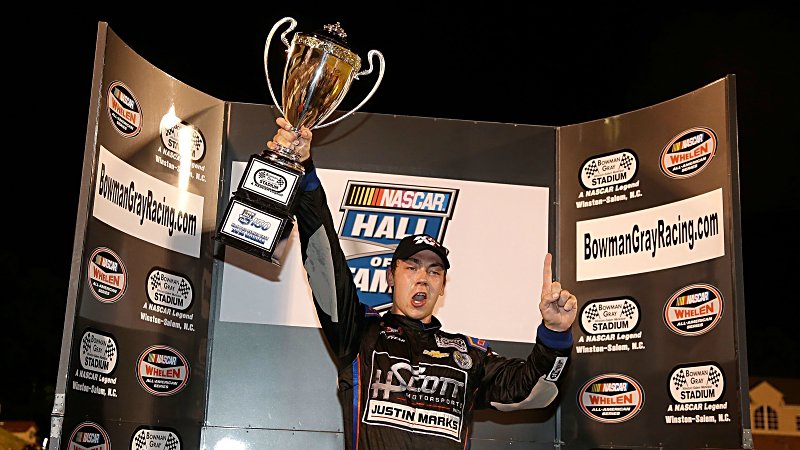 Winston Salem, N.C. (May 31, 2015) – HScott Motorsports with Justin Marks entered the NASCAR Hall of Fame 150 at Bowman Gray Stadium looking to get back to victory lane for the second time in 2015 and the second time in the history of the organization. The night got started on the right foot, as Scott Heckert was able to capture the Coors Light Pole Award. The 21-year-old didn’t stop there, as Heckert went on to lead wire-to-wire to capture his third-career victory in the NASCAR K&N Pro Series East (NKNPSE).

Heckert got the day started the right way for HSMJM after leading the practice sheet in final practice and following that by earning his fourth-career NKNPSE Coors Light Pole award, his first in 2015. As the race began, Heckert showed that the No. 34 Project Lifesaver Chevrolet had speed, jumping out to a commanding lead in the race and quickly beginning to put other cars one lap down. Heckert was able to hold some charges by his teammate Sargeant throughout the 150-lap race and lead wire-to-wire to capture his first victory of 2015. The win vaulted Heckert to fourth in the NKNPSE Driver Point Standings, just 18 points behind the current points leader, his HSMJM teammate William Byron.

Scott Heckert on his night at Bowman Gray and picking up the victory:

“Our car was great, I can’t thank these HScott Motorsports with Justin Marks guys enough. They worked so hard to give me a perfect car and that’s really what it was. On the short run those guys could stick with us, but on the longer run we just had a really strong car. They deserve to be in victory lane and I’m glad that’s where we ended up.”

The NASCAR Hall of Fame 150 can be seen on Thursday, June 4 at 6 p.m. EDT on NBCSN. HScott Motorsports with Justin Marks will next hit the track at Langley Speedway on Saturday, June 20.