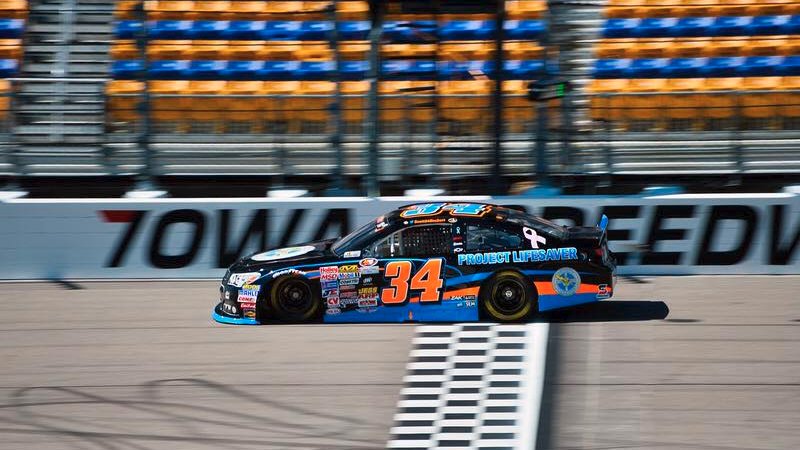 NEWTON, Iowa (August 1, 2015) – HScott Motorsports with Justin Marks entered the #ThanksKenny150 looking to return to victory lane for the seventh time in 2015.

Heckert came into the #ThanksKenny150 looking to build upon past success at Iowa Speedway. The 21-year-old had three-straight top-10 finishes at the Iowa track and looked for more of the same in this trip. Heckert began the evening qualifying in the 11th position. As the race began, Heckert showed that he had a machine that could run up inside the top 10 as he began looking for more in the No. 34 Project Lifesaver Chevrolet. By the midway portion of the event Heckert ran in the ninth position. Some late-race restarts in the race’s closing laps allowed Heckert to move into the eighth position overall, fifth in the NKNPSE, where he would eventually finish. Heckert sits second in the NKNPSE Driver Point Standings heading into Watkins Glen next weekend, a track he won at one year ago.

Scott Heckert on his night at Iowa Speedway:

“We kind of ran around eighth to 12th all night. We had to fight hard every restart with people battling for the top lane and driving really hard, leaning on each other. I had a lot of fun racing out there and had to give it my all. I’ve really got to give a big thanks to this HScott Motorsports with Justin Marks team for battling through from the engine change in the middle of the day to bring home an overall good points day for us.”

The #ThanksKenny150 airs on Thursday, August 6 at 7:00 p.m. EDT on NBCSN. The next stop for the NKNPSE comes next weekend at Watkins Glen International on August 7.