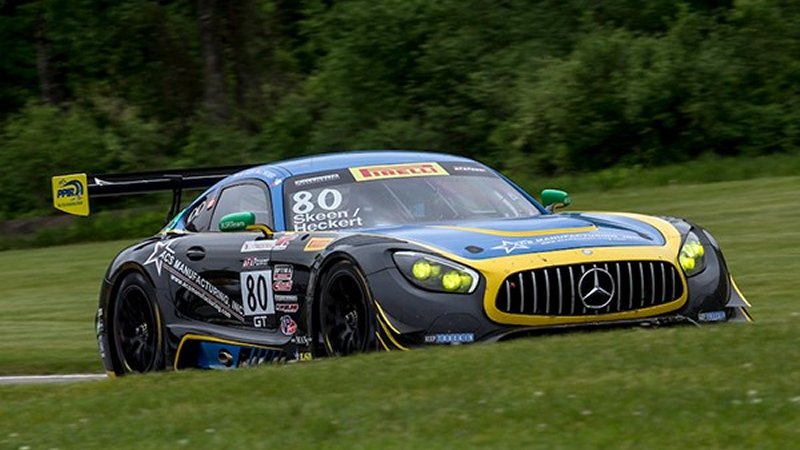 Rounds 5 and 6 of the 10-race Pirelli World Challenge SprintX series, Lime Rock featured the only same-day doubleheader on the 2018 schedule.

The Memorial Day event got off to a promising start as the Lone Star Racing No. 80 and Skeen were moved to the pole position for the start of Monday’s first race. Having qualified a close second on Saturday, Skeen instead was elevated to the pole when the original fastest qualifier had a technical infraction. The pole was the second in the year’s first three SprintX race weekends for Lone Star and Skeen.

Skeen edged into the lead at the start of race one only to come together with another competitor as he had to hug the inside line entering Lime Rock’s Turns 1 and 2 “Big Bend” section. Race officials ruled Skeen had “incident-responsibility” for the contact a few minutes later, the second time in the last two SprintX races where Skeen and the Lone Star team were hit with a penalty for what appeared to be a “racing incident” in the opening seconds of an event.

“It’s disappointing to come out of the Lime Rock race this way,” Skeen said. “We had a good start from pole position in round one but had a racing incident with the other Mercedes-AMG GT3 into Turn 1. Unfortunately, we were given a drive-through penalty for it, even though the other driver didn’t really agree with it either. We took the penalty, that set us back quite a way, and Scott took over and finished it out.”

Never having the chance to battle for a good result in the opening round, starting driver Heckert quickly moved off to a competitive start in Monday afternoon’s final one-hour race. He made a pass for position and was ultimately up two spots to sixth overall by the completion of lap one.

“Going into the start the main thing was that we wanted to pick up a spot or two,” Heckert said. “60 minutes around Lime Rock is a lot of laps and a lot of chances for things to go wrong. We wanted to keep it clean but I figured if I kept it on the outside at the start I would be on the inside into Turn 3 and be in a good position. I got through for a pass cleanly and we had really good pace throughout the race. I wish we were up a little further in the final results, but the preparation on the Mercedes-AMG GT3 by the Lone Star Racing team was top notch.”

Skeen took over from Heckert halfway through Monday’s final race and maintained the No. 80’s position of fifth in GT Pro and sixth overall to the checkered flag.

“Scott had a great start in race two,” Skeen said. “He was up to P6 by the end of lap one. We lost a little bit of ground on the pit stop and just tried to bring it home from there and pick up as much and salvage what we could.”

Despite the pair of disappointing results, Skeen, Heckert and Lone Star have put together a solid record of four top-five GT Pro finishes in the year’s first six SprintX races. The record includes podium finishes in half of the year’s races, including a victory last month in Round 4 at VIRginia International Raceway (VIR) and second and third-place podium finishes in the season-opening doubleheader weekend at Circuit of The Americas (COTA) in March.

“The ACS Manufacturing/Lone Star Racing crew once again prepared a great Mercedes-AMG GT3 for Mike and Scott,” said Lone Star Racing Team Manager AJ Petersen. “We had great pace but the chance to show it was taken away before we really got started. We are moving on, I am proud of everybody that is part of Lone Star Racing, and we are all grateful to our owner Dan Knox for making all of this possible.”

– Heckert is a Connecticut native who knows the 1.5-mile Lime Rock Park road course well. “All of my family was out, lots of friends from my hometown, and I stayed at home all weekend,” said Heckert, who is originally from Ridgefield, Connecticut. “It’s that close, I can drive back and forth, so definitely a home track. It’s where I grew up and learned how to race in a full-size car. I know the place very well and that helped get acclimated there a little quicker.”