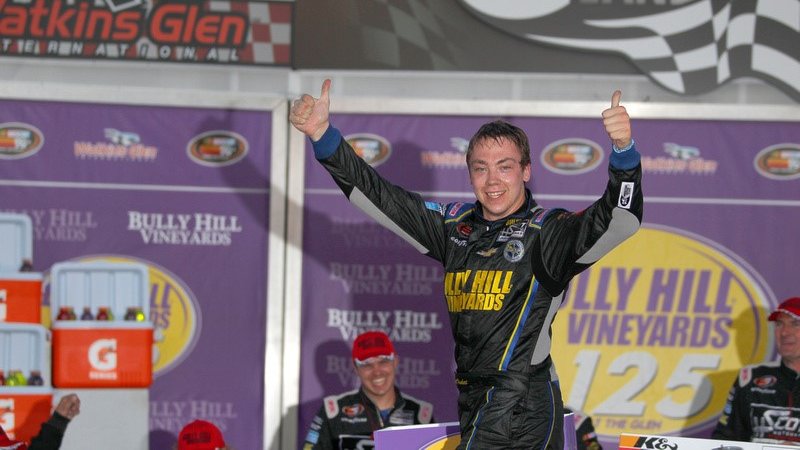 WATKINS GLEN, N.Y. (August 8, 2015) – HScott Motorsports with Justin Marks (HSMJM) entered the Bully Hill 125 looking for another strong run after an outing in Iowa last weekend that saw all five cars finish in the top 13. It was Scott Heckert who led the way, capturing his fourth-career NASCAR K&N Pro Series East (NKNPSE) victory and second-straight at Watkins Glen International.

Heckert entered the Bully Hill 125 looking to return to victory lane for the second time this season. The 21-year-old began the event in the third position and quickly showcased the speed behind the No. 34 Bully Hill Chevrolet, running inside the top five for the majority of the event. A late charge in the first half of the event saw Heckert overtake teammate and race leader J.J. Haley to bring the No. 34 to pit road as the race leader under the halfway break. The second half saw Heckert dominate, as the Connecticut native was out front for the rest of the event, leading a total of 22 laps to bring home his fourth-career NKNPSE Victory. This marks Heckert second-straight win at Watkins Glen and third straight in a road course event. Heckert sits second in the NKNPSE Driver Point Standings, just 14 points behind HSMJM teammate William Byron heading into Motordrome Speedway next weekend.

Scott Heckert on his his second-straight Watkins Glen win:

“The race was actually really hectic, especially there in the earlier parts. A lot of cautions early on bunched up the field and made for some really exciting racing. We had a really strong Bully Hill Vineyards HScott Motorsports with Justin Marks Chevy. Once we got clear on those restarts we knew we had a fast car, so I just kept working hard to get clear of the traffic and hoped for a long green-flag run, which we had at the end. It was extra special to get to celebrate in Victory Lane with my sponsor, who also sponsored the race. I’m glad we could put on a good show for everyone at Bully Hill Vineyards.”

The Bully Hill 125 can be seen on Thursday, August 13 at 7:00 p.m. EDT on NBCSN. The NKNPSE heads to Motordrome Speedway next weekend on August 15.